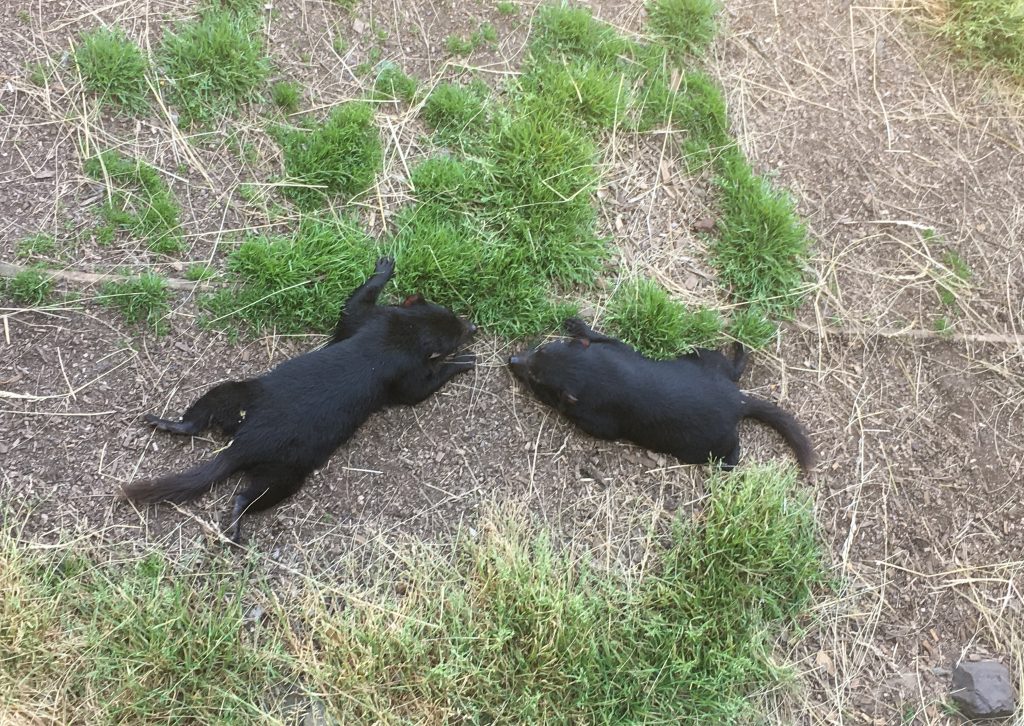 We are amazed by the Tasmanian wildlife and every single day, one of these animals makes us smile (or sometimes annoy or freak us out – depending on the type). In this post, I will write a bit about some of the animals that we have met so far – and those who are still on our list to make an encounter.

In the first week, we stayed in Sydney with Lee and her family and went to the zoo, where we saw many Australian animals, for example, koalas and wallabies. So when this “tiny kangaroo” scampered right next to our camper van at Mt. Field National Park, we were excited to see our first wallaby in the wild. 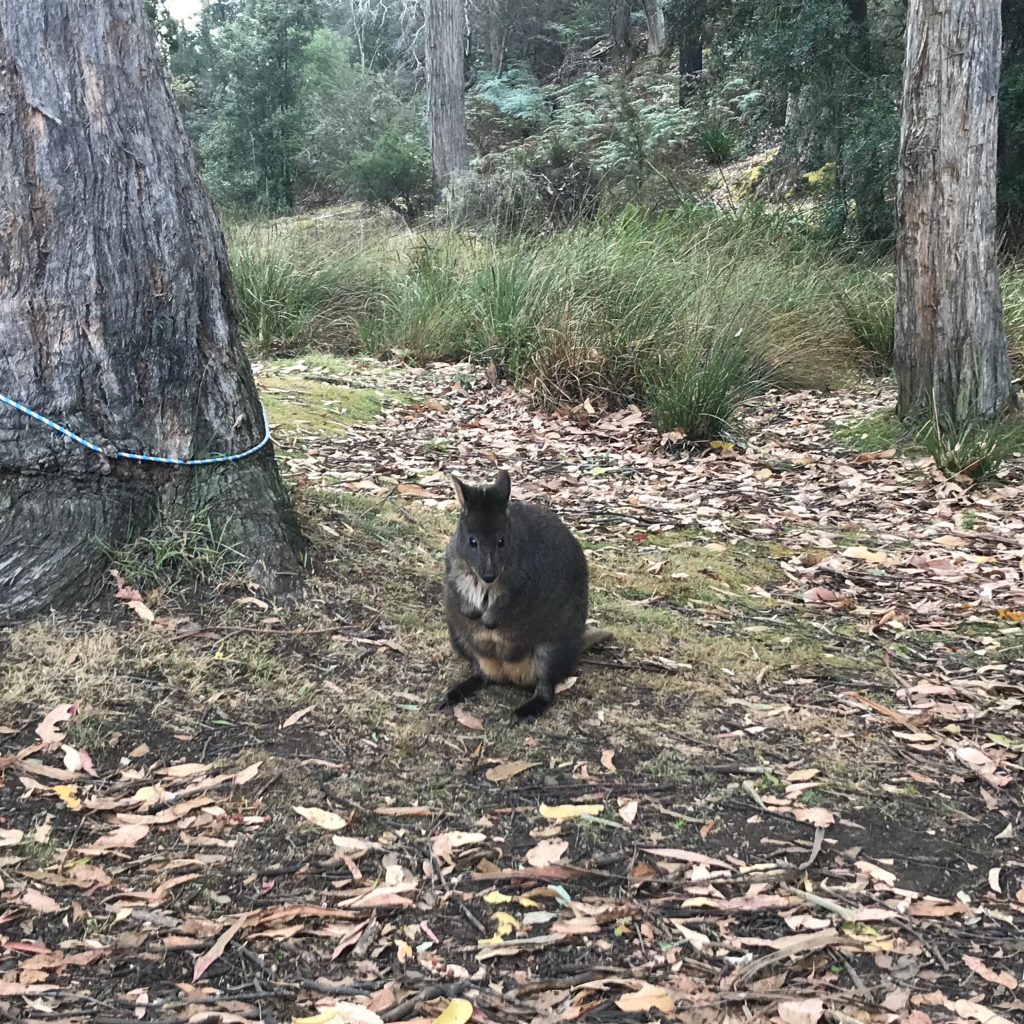 When I shared this picture with Lee, she mentioned that it’s quite small for a wallaby. And of course our animal expert at home – Stefan – was super excited about us spotting a “pademelon” in the wild. Hm?? Pade…what??? Yes indeed, this was neither a tiny kangaroo nor a wallaby, it was a pademelon. In the next days and weeks, this cute creature crossed our paths many times.

We also learned from rangers, how to keep pademelons apart from wallabies and kangaroos. All three animals are related to each other and thus look quite alike. However, pademelons are the tiniest; wallabies are a bit larger and have black ear tips, snouts and feet. Kangaroos are the largest of the three animals. We could see all three animals in the wild at Narawntapu National Park.

We knew already that the Tasmanian devil is an endangered species, especially due to the Devil Facial Tumour Disease. Given that they are very rare and also nocturnal, it is quite unlikely to see them in the wild.

We visited the sanctuary and conservation facility Devils@Cradle in the Cradle Mountain National Park and were just in time to join the day keeper tour where we learned so much about the Tasmanian devils, spotted-tail quolls, the sanctuary and their work to prevent devils and quolls going extinct.

The day keeper showed us a 8 minute long documentary abut Tasmanian devils by Sir David Attenborough, before he showed us the little joey Katie, with 1 kg currently the smallest devil in the park. 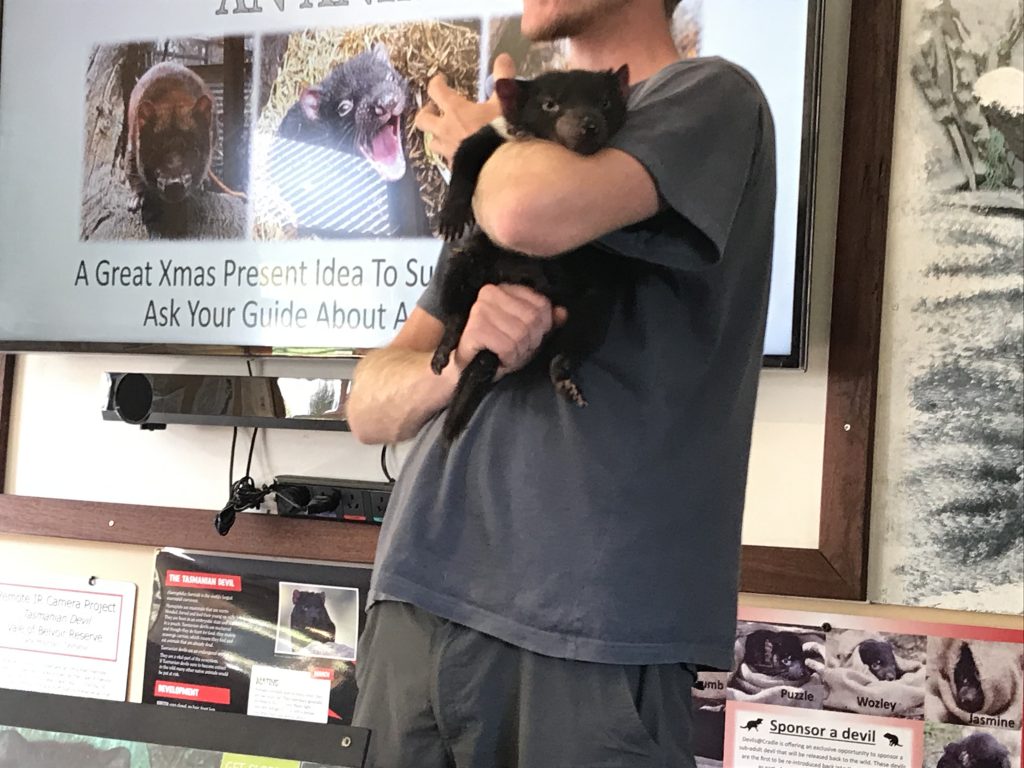 The Tasmanian devils who are re-introduced into the wild are kept away from visitors. Devils like Katie and others who are visible during the day will not be returned to the wild, as they are used to humans and daylight and will hopefully breed new little devils.

The Tasmanian devil got his name because of the sounds they make. Early European settlers heard the animals growl and scream at night; combined with the red ears, wide jaws and big sharp teeth led them to call it “The Devil”.

Spotted-tailed quolls are on the top of the food chain, but extinct on the Australian main land because of foxes that have been introduced. Quolls are predators and although quite small themselves, they prey on bandicoots, possums, echidnas, rabbits and even small wallabies. The ones we saw were chilling in the sun though. 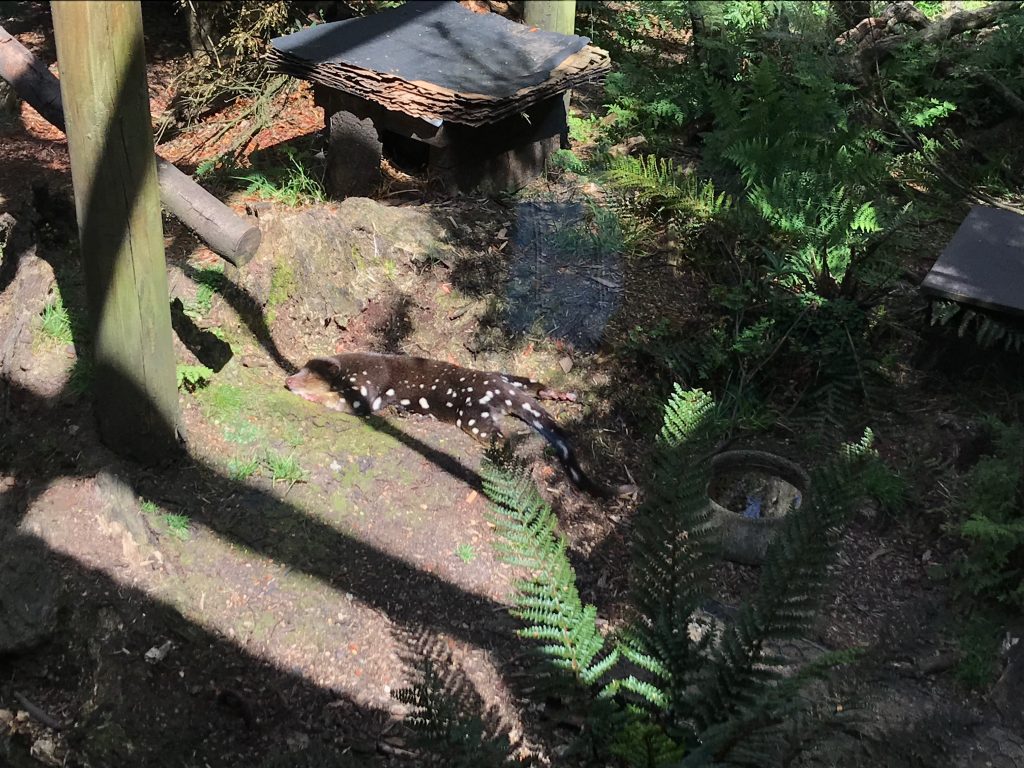 Spotted-tailed quoll in the sun

We were very excited to visit Ronny Creek at Cradle Mountain National Park, as well as the Narawntapu National Park, because we read that it is very likely to see wombats there.

At Cradle Mountain we had no luck; we only saw lots of cube-shaped wombat droppings, for which they are famous. Moving on to Narawntapu National Park, we asked at the information centre about the best spot to see wombats. The ranger informed us, that unfortunately, the Tasmanian devil is not the only species suffering from a deadly disease. Most likely we wouldn’t see any, because Tasmania lost 95% of its wombat population due to mange. We later saw an information sheet at the campsite about this: 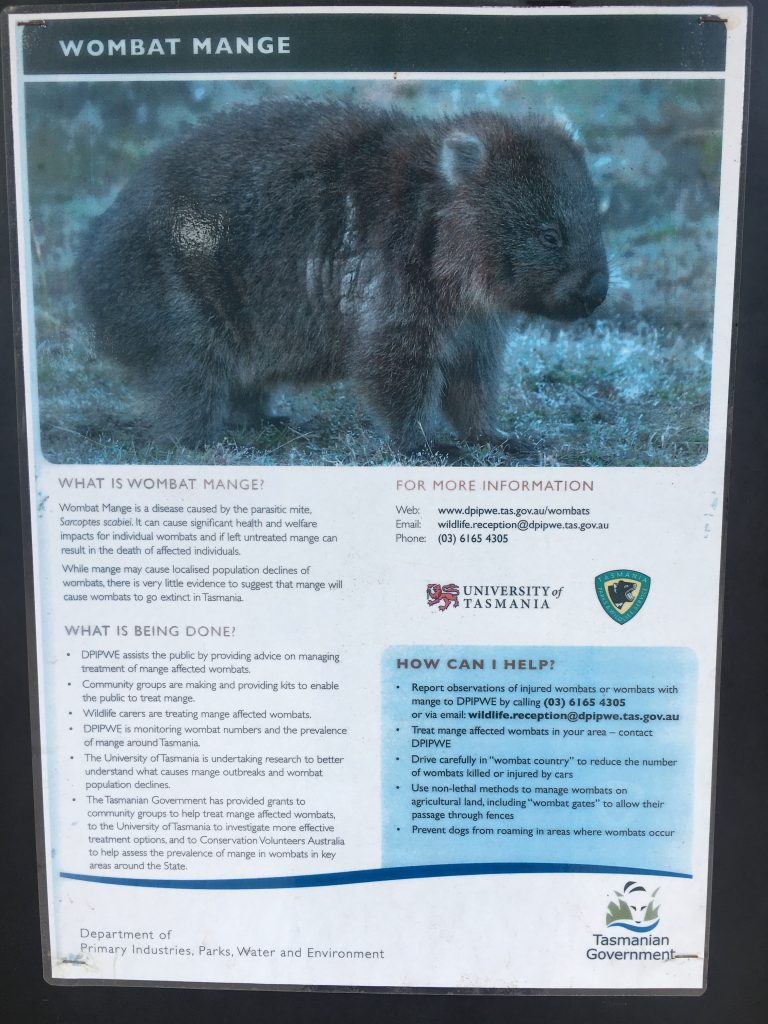 The ranger told us, that wombats don’t like the heat. This is probably the reason why we saw no wombat at Cradle Mountain, despite heaps of their droppings. So we hope that eventually we might see one of them. (And no – we will not chase them with a selfie stick!)

In the Bruny Island post, Marcel already wrote about the reptile show, where we saw the Tasmanian snakes for the first time and also learned plenty about their behavior and how we should behave in case we ever meet one in person. 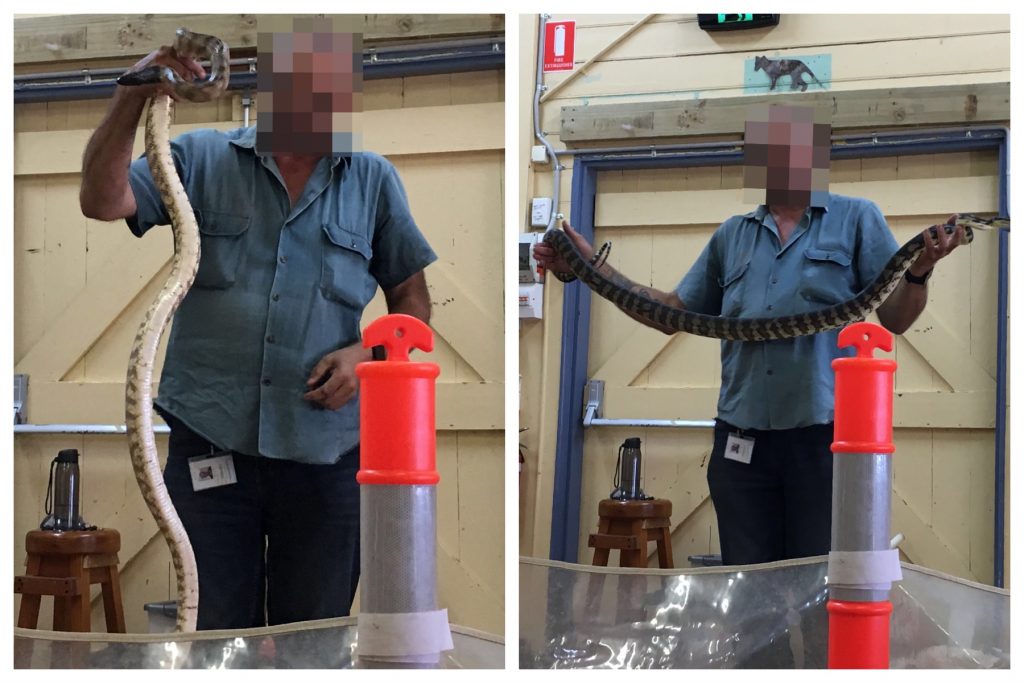 Most rangers told us that the snakes are actually afraid of humans; so unless you step on it, you should be fine. So watch were you go… However, at O’Neills Creek Picnic Reserve, we met someone who told us about tiger snakes in Victoria who are not so anxious but rather vicious. He recommended to beat retreat when encountering a snake in Victoria.

The first echidna I encountered was at the Zoo in Sydney. I think it looks like a cross between a hedgehog and a vacuum cleaner.

We saw our first echidna in the wild when walking the Lady Barron Falls circuit. Most likely we would have missed it, hadn’t it been for the cute little girl that approached us being all excited: “There is an ECHIDNA!!”

While Marcel climbed Mt Rufus, I saw another one very close to our camper van. Very cute!

Mid January, Marcel and I did a hike at the Serpentine Dam (see this post) which was more challenging than we thought. Besides it being quite a scramble, I noticed quite large flies around me – and LOTS of them. And they were buzzing super loud and it felt as if they were attacking me. Seriously – it drove me crazy and although I had to pay attention to scramble up the bath, I couldn’t suppress the reflex to swat them away.

When Marcel went a bit further without me, to check how far it was to the summit, I stayed and sat on a stone, where I was again viciously attacked by the flies. I was trying to meditate the anger away and keep equanimous ??‍♀️. But that was just impossible… Having about 20 or 30 big flies buzzing around your head just drives you nuts, even if you know that unlike mosquitos they don’t bite.

During that week I was reading the book “In a Sunburned Country” by Bill Bryson. Funnily enough, the very same evening, I read the following section in the book:

I had gone no more than a dozen feet when I was joined by a fly – smaller and blacker than a housefly. It buzzed around in front of my face and tried to settle on my upper lip. I swatted it away, but it returned at once, always to the same spot. A moment later it was joined by another that wished to go up my nose. It also would not go away. Within a minute or so I had perhaps twenty of those active spots all around my head and I was swiftly sinking into the state of abject wretchedness that come with a prolonged encounter with an Australian fly.

Flies are of course always irksome, but the Australian variety distinguishes itself with its very particular persistence. If an Australian fly wants to be up your nose or in your ear, there is no discouraging him. Flick at him as you will and each time he will jump out of range and come straight back. It is simply not possible to deter him. Somewhere on an exposed portion of your body is a spot, about the size of a shirt button, that the fly wants to lick and tickle and turn delirious circles upon. It isn’t simply their persistence, but the things they go for. An Australian fly will try to suck the moisture off your eyeball. He will, if not constantly turned back, go into parts of your ears that a Q-tip can only dream about. He will happily die for the glory of taking a tiny drop on your tongue. Get thirty or forty of them dancing around you in the same way and madness will shortly follow.

There is nothing to be added! Or maybe I should add that March flies actually do bite – which I learned at Lake St. Clair National Park: 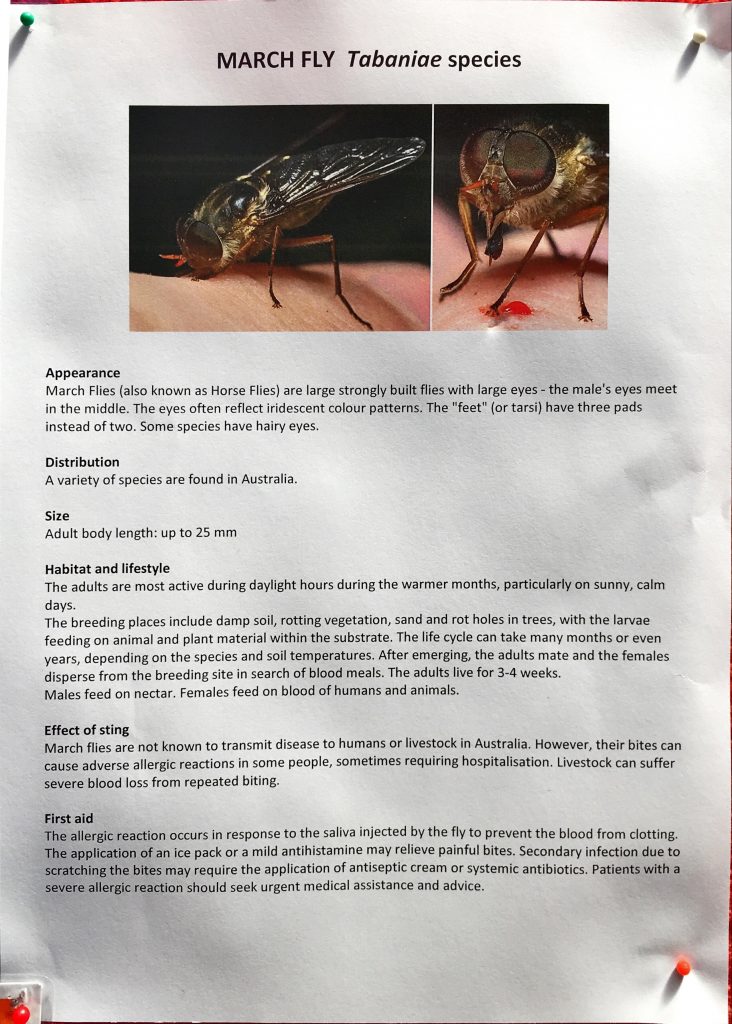 There are many interesting birds in Australia – which we already learned a bit about during the bird show in the Zoo in Sydney. We also learned more about them during the “discovery activities”. During the “creatures of the night” walk, Hannah told us about the Grey Butcherbird which got his name from the habit to hang their prey in a tree fork and basically gut them.

At Narawmtapu National Park we visited the Bird Hide, where we could watch waterbirds in the lagoon. 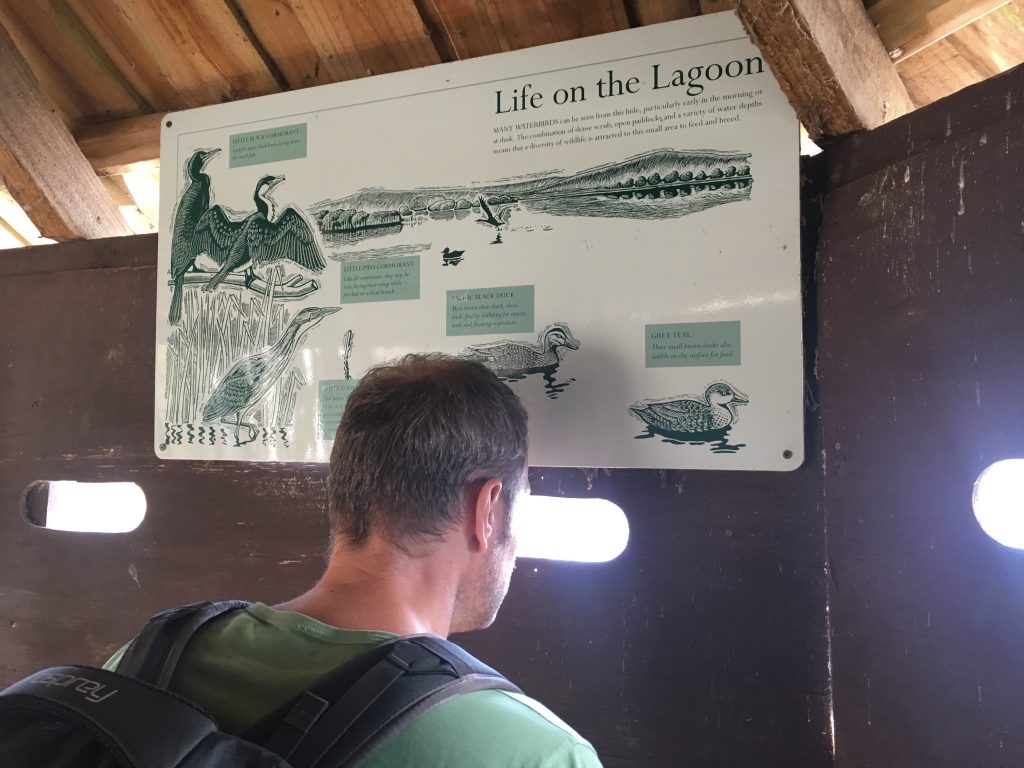 On the information board we recognized a bird, that we had seen next to our camper van: a superb fairywren. 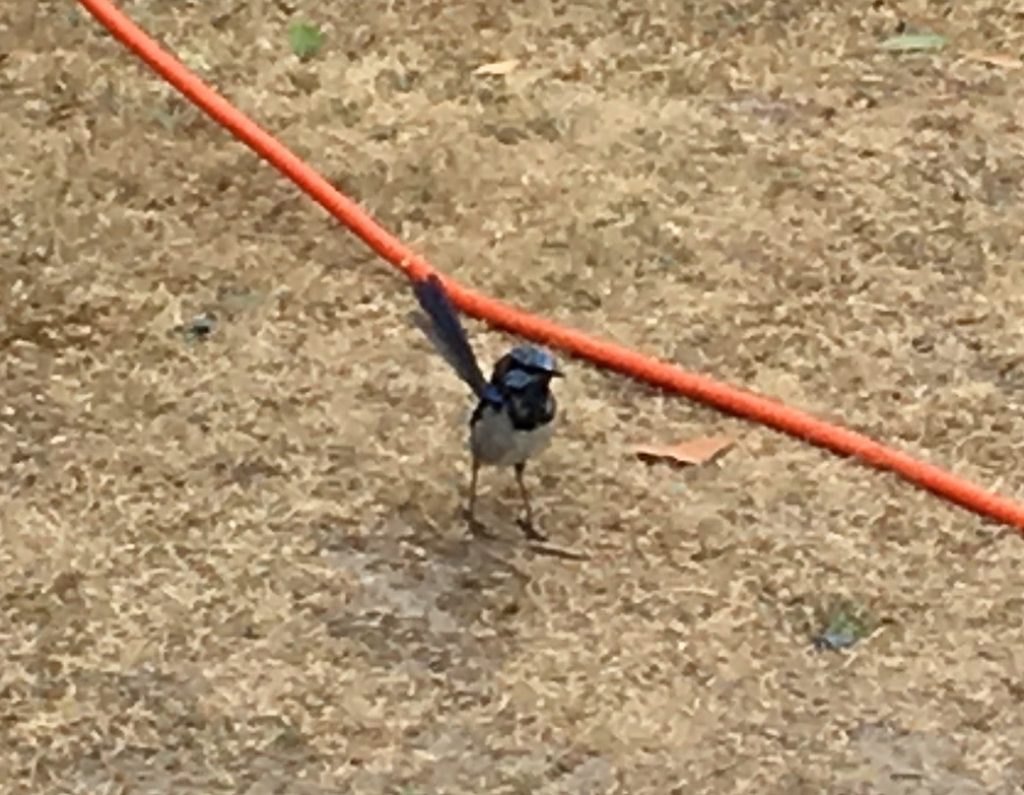 Several birds visited us at our camper van – especially when we set up a little birth bath for them in a little pottery bowl someone had left there:

The pademelons were also quite happy about this source of water:

Speaking of birds: Did you know that they can be considered a natural snake alarm system? We learned from Michael to listen to the birds when hiking, because when they spot a snake, they become really loud warning the other birds. That’s really nice. However, it seems that it’s not a 100% secure alarm system, because when we saw our first snake at Lake St. Clair, no bird was making a sound. So always keep ears and eyes open ?.

At O’Neills Creek Picnic Reserve we got two know two very friendly chicken. The same guy who told us about vicious snakes in Victoria also asked us, if we knew that chickens are actually related to the Tyrannosaurus rex. A fact that his son had commented with “What a fall from grace!” ? We stayed at the campsite for three nights and on the second day, we named them T-Rex and Mr. Miyagi. 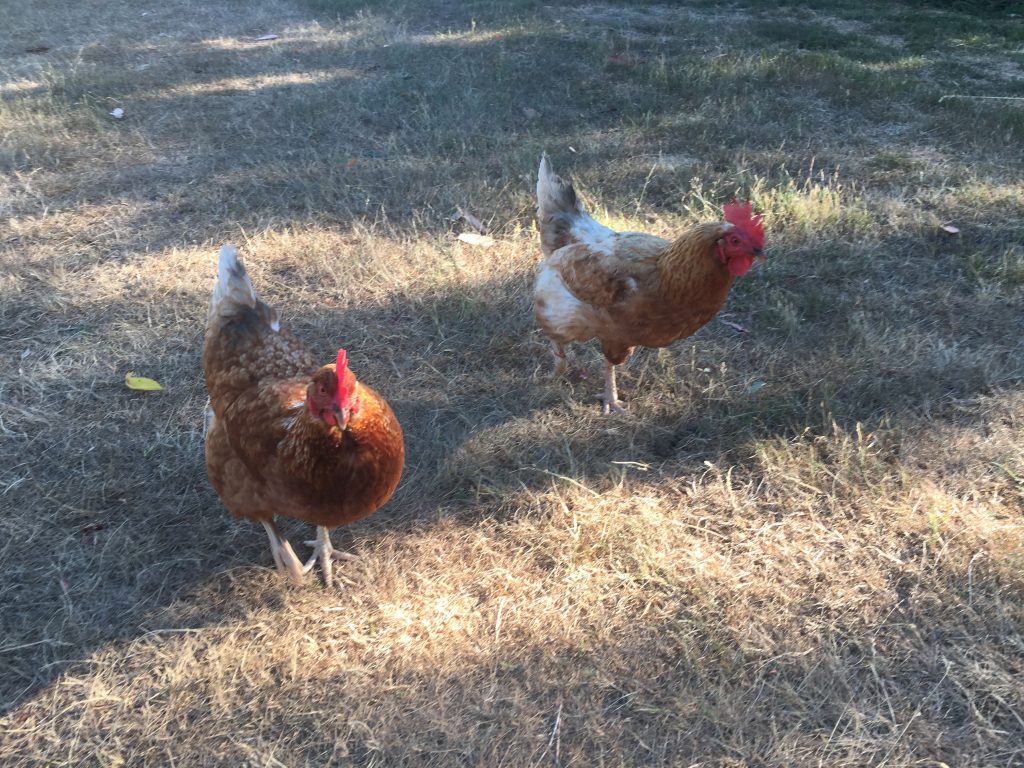 We started to like them a lot, because they were eating the annoying flies! So when T-Rex and Miyagi came along, it took maybe a minute and we were fly-free. We were a great team. When I tried to get rid of them by waggling with my hands around my head, every now and then I managed to hit one and push it towards Miyagi or T-Rex. And peck – it was gone ?. Just in case you wonder about why we named one of them Miyagi: 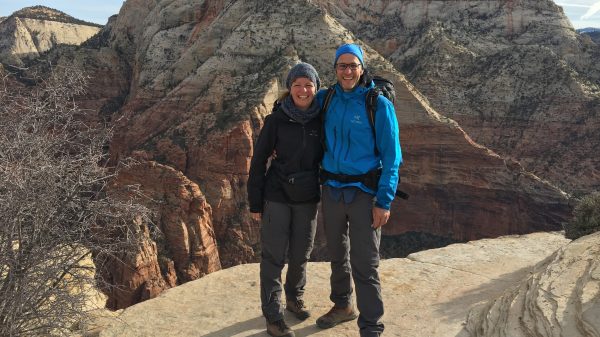 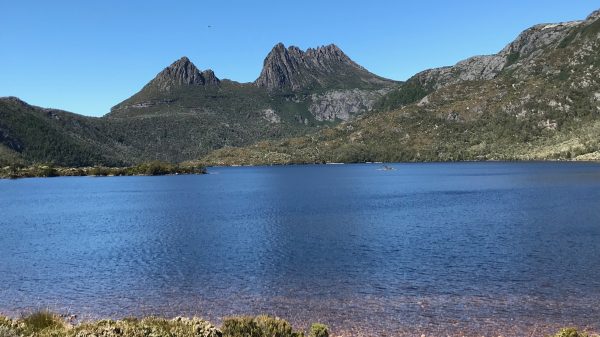 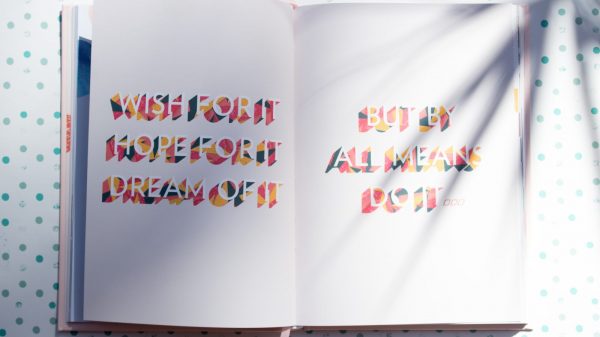 Taking time off: Crazy, awesome, or both?