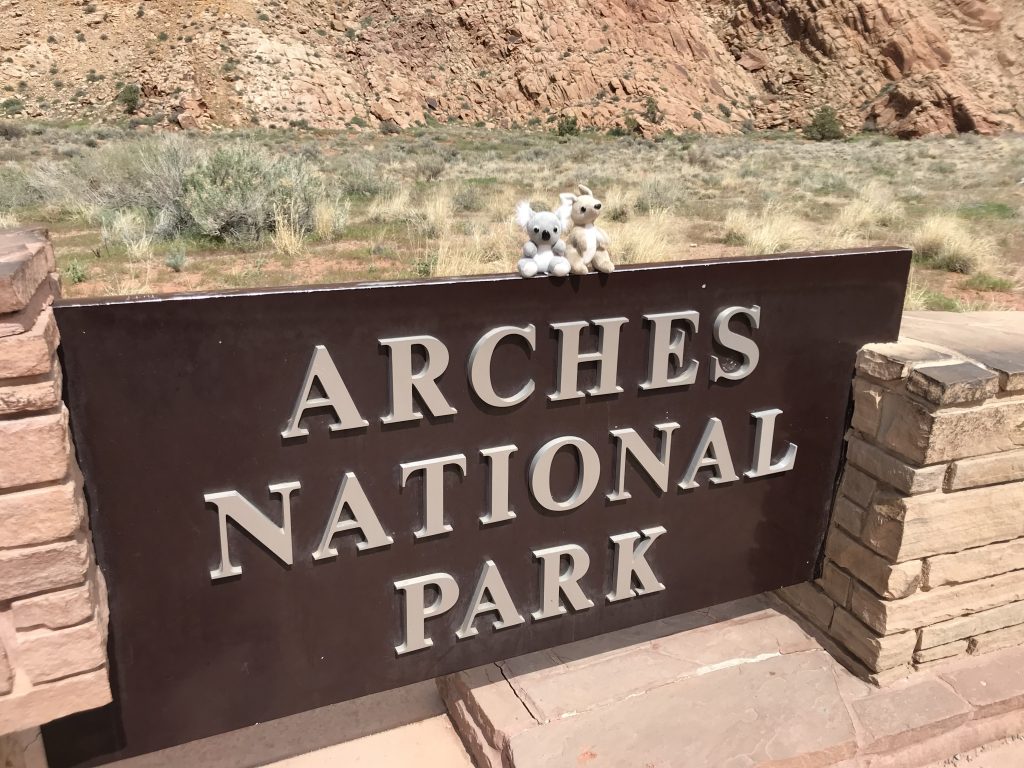 Arches National Park is also one of the parks on the grand circle. Between visiting the two districts Island in the Sky and The Needles of Canyonlands National Park, we could fit in Arches as it was on our way.

As we expected by now, the Devils Garden campground ($25/22 € per site) that is located close to interesting trails about 18 miles from the park entrance was of course booked out and there were also no walk-ins available. So while being on our way to the national park, I tried to book a powered spot at the Moab Valley RV Resort & Campground outside the park. The advantage was, that we could do some laundries and also do some blogging. The website had no spots available and when trying to call them I was on hold for ages. After checking the visitor centre for information, we were still quite early, so we just went there, got lucky and secured a spot for $62 (~54 €). 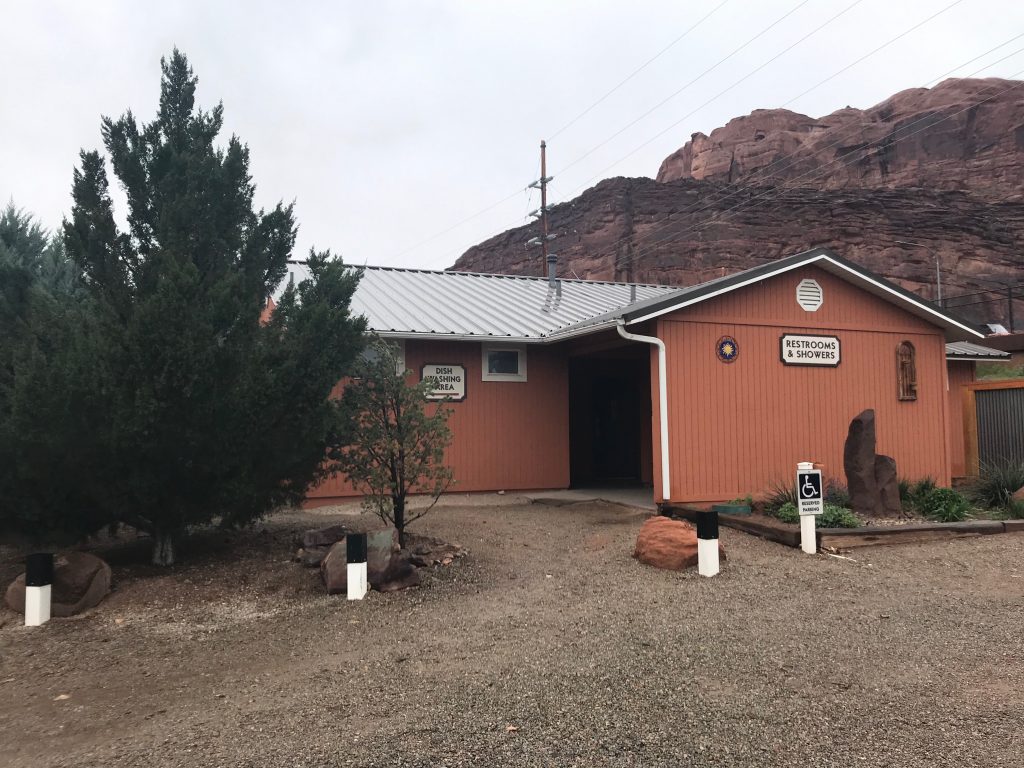 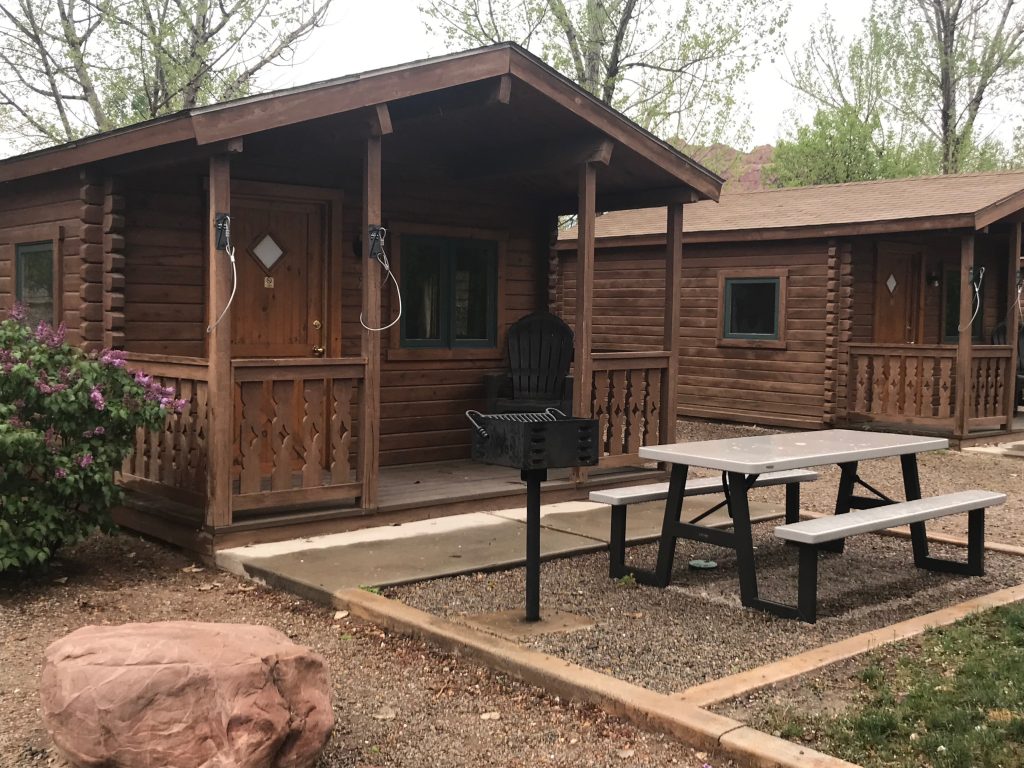 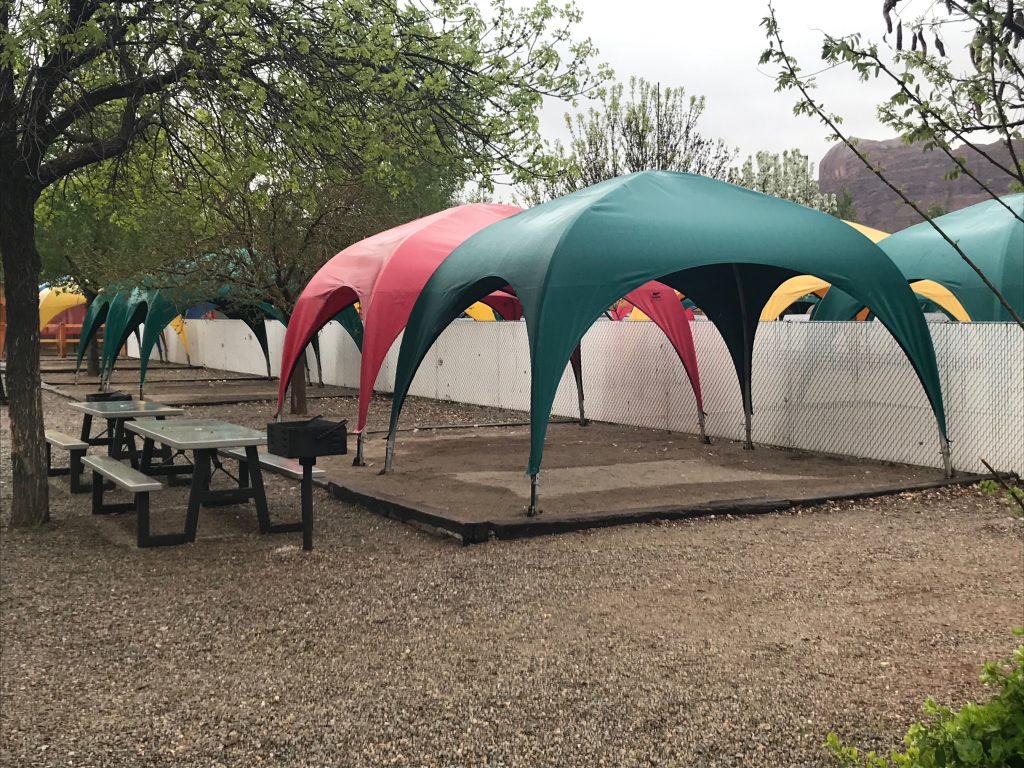 As it was raining a lot, we used the opportunity to do some chores like laundry, refill our propane, dumping waste water, and also writing the next blog posts. The WiFi was excellent here so we could upload the pics right away.

The next day we wanted to drive through the Arches National Park to get an overview and walk to some of the highlights. Marcel would have loved to do one of the longer trails in the Arches National Park for which we were already a bit late that day and he was not very keen to drive more than 20 miles (32 km) the next morning to get there. It would have been nice to stay at the Devils Garden Campground and then just start walking from there in the morning… So instead Marcel took a picture of what Joshie would have looked like in one of these spots 😅 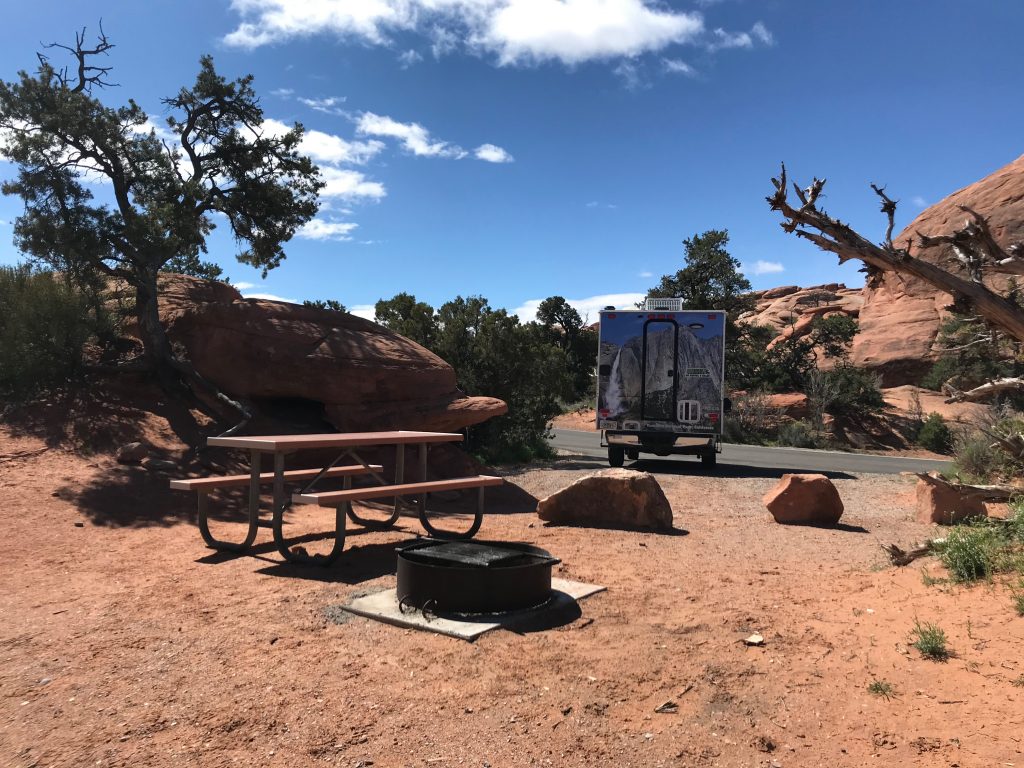 So we decided to just walk parts of the trail and also drive to the many other viewpoints and arches. First we went to the Amphitheater from which we could see our first arch. 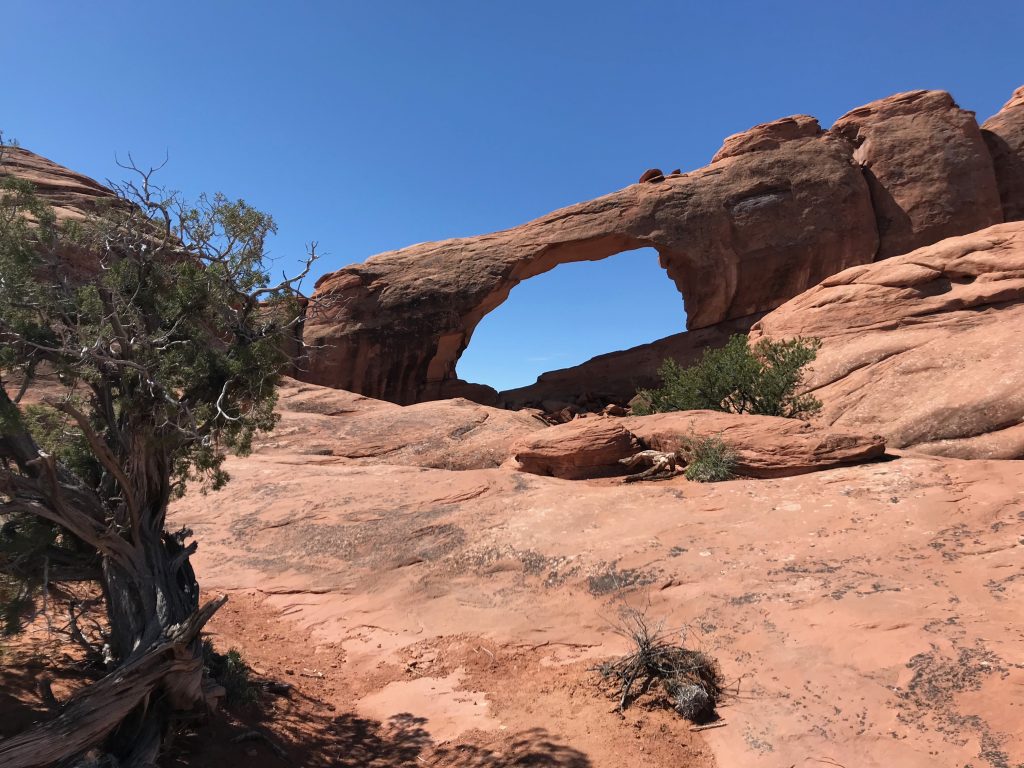 Arch visible from the Amphitheater

We then walked the first part of the trail Marcel had planned to do. There are many arches on the way. The information signs are very interesting and we learned how the arches are developed over time through erosion. 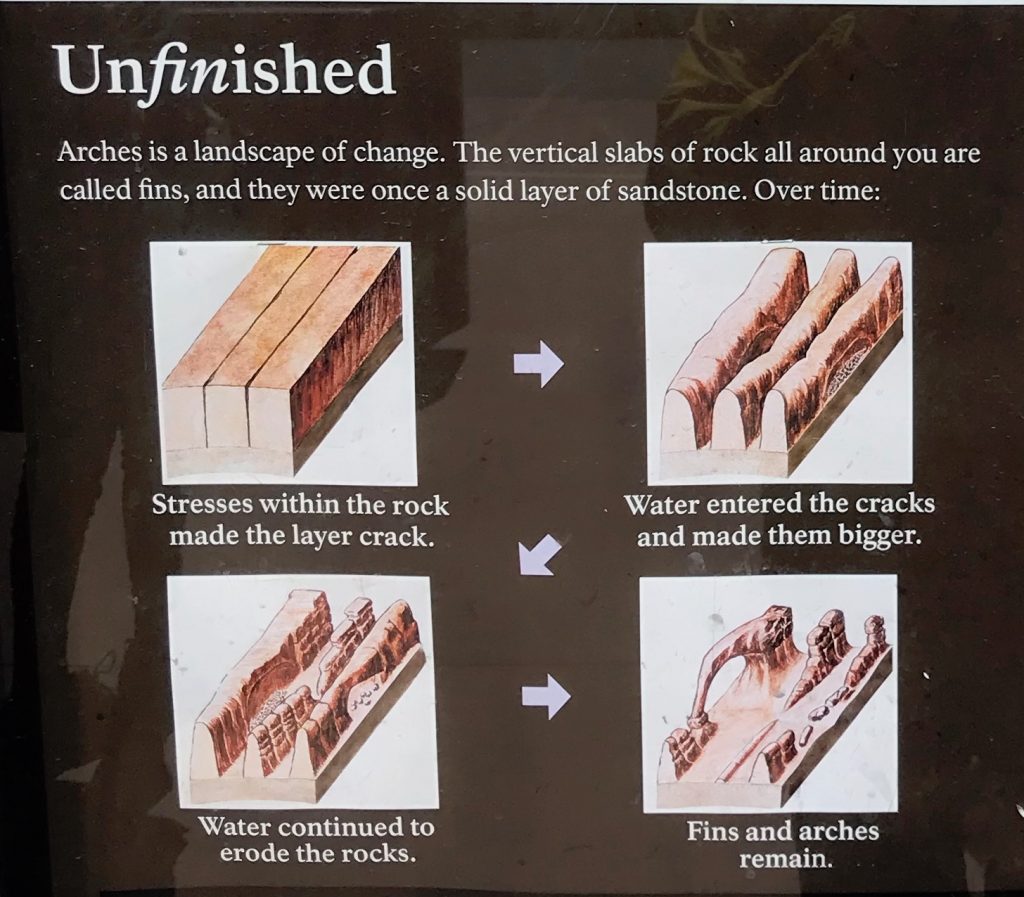 How arches develop over time

The first stop at the Devils Garden trail was the Landscape Arch. I had read about this one in the book A Complete Guide to the Grand Circle by Eric Henze. He wrote that this arch is the longest in North America, the second largest in the world with 306 feet base to base (~93,3m). As the Landscape Arch is very fragile, the US stopped supersonic jet flights over or near national parks in 1972. 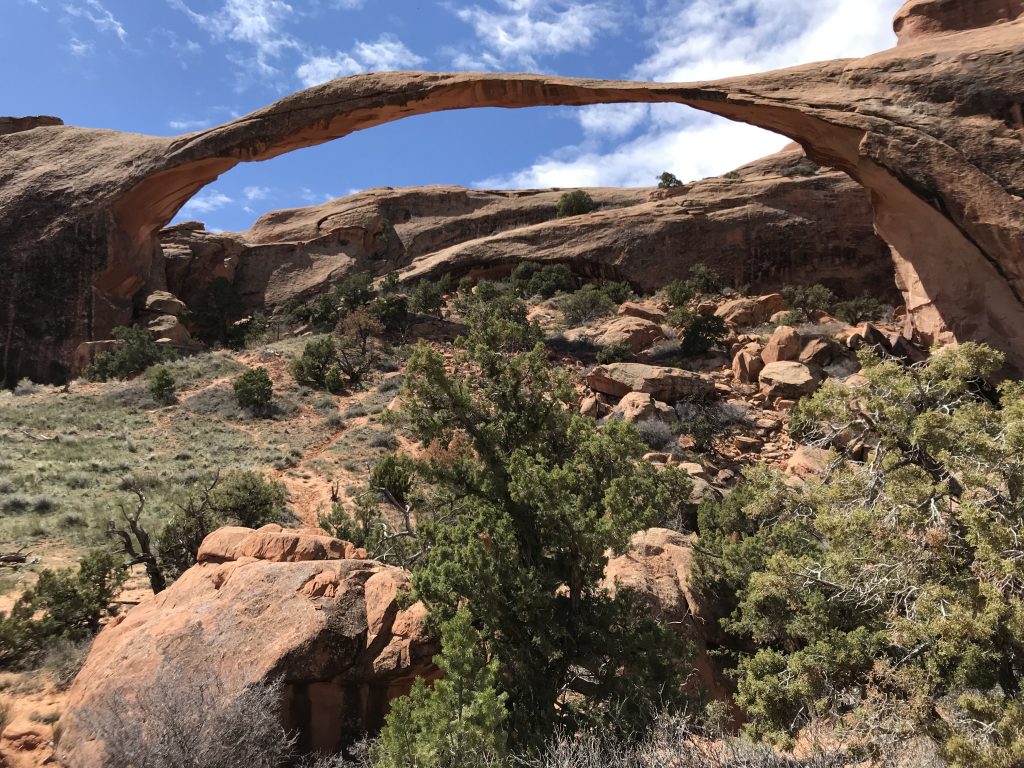 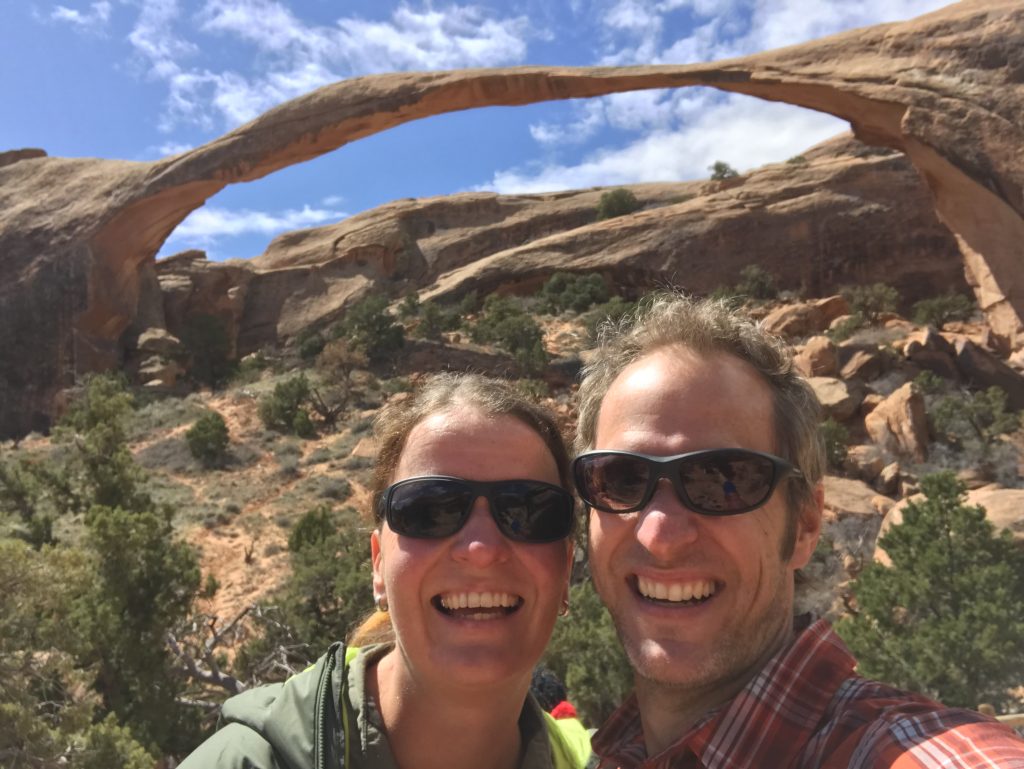 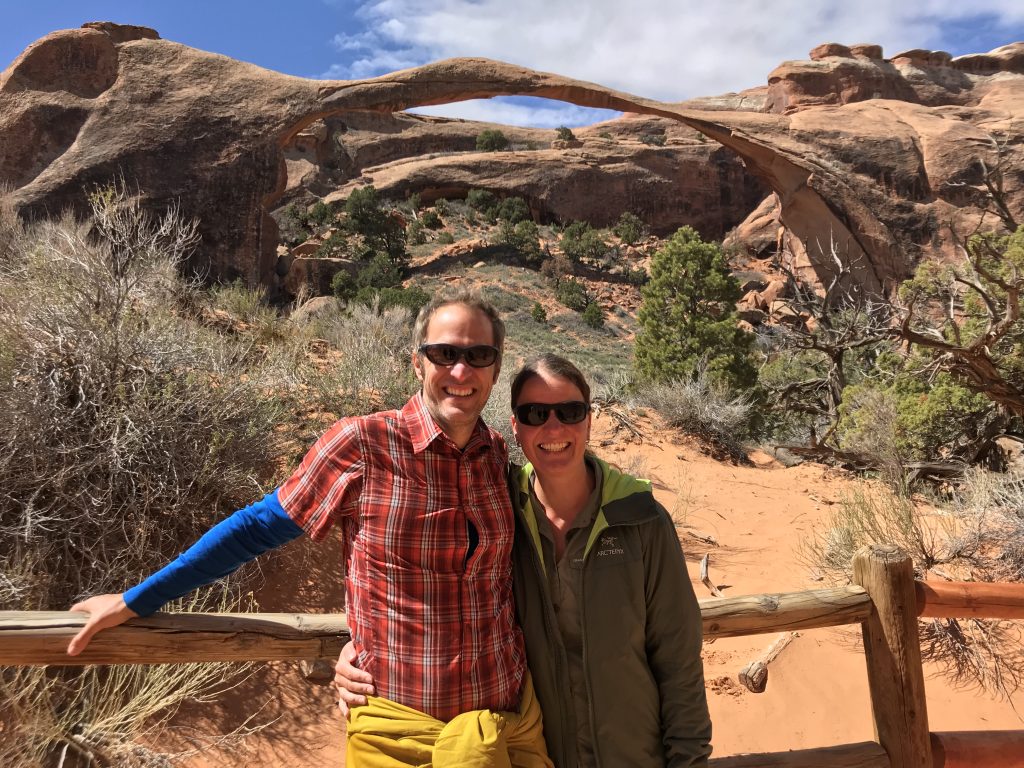 We read on the information sign, that in 1991 hikers who were resting under the Landscape Arch heard loud cracking and shortly after they fled, 60-foot-long rock slab peeled away from the right side of the arch, resulting in 180 tons of fresh rock debris laying on the ground. After this event, the trail under the arch was closed and is still closed today in the interest of visitor safety and preservation of the landscape. 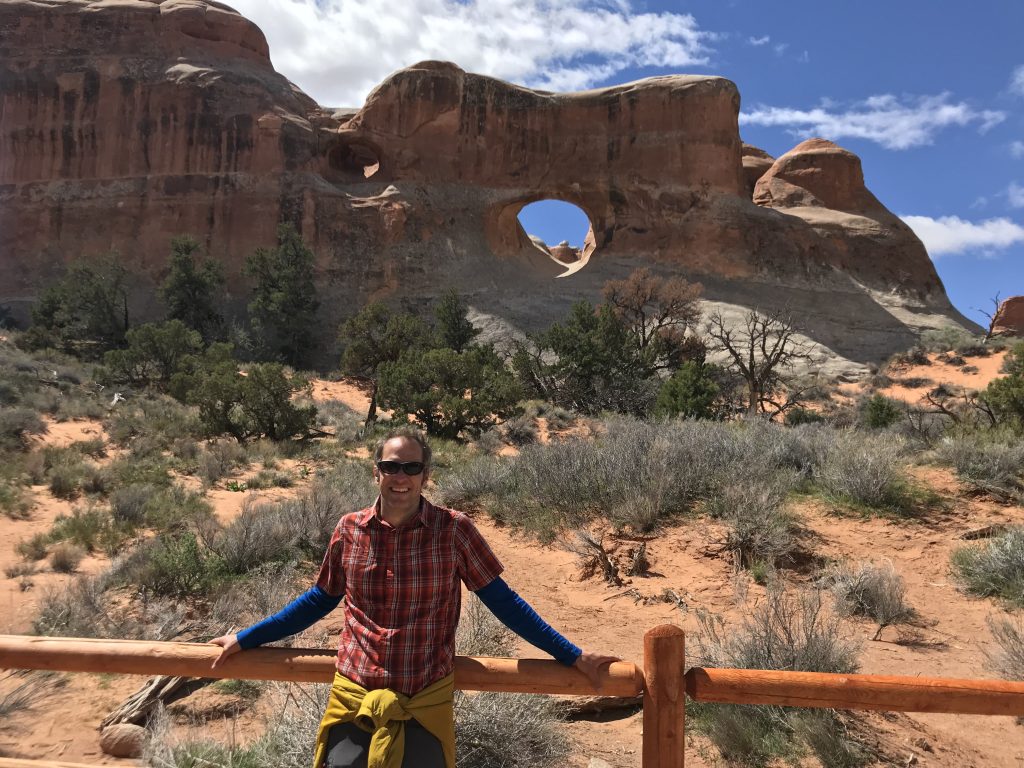 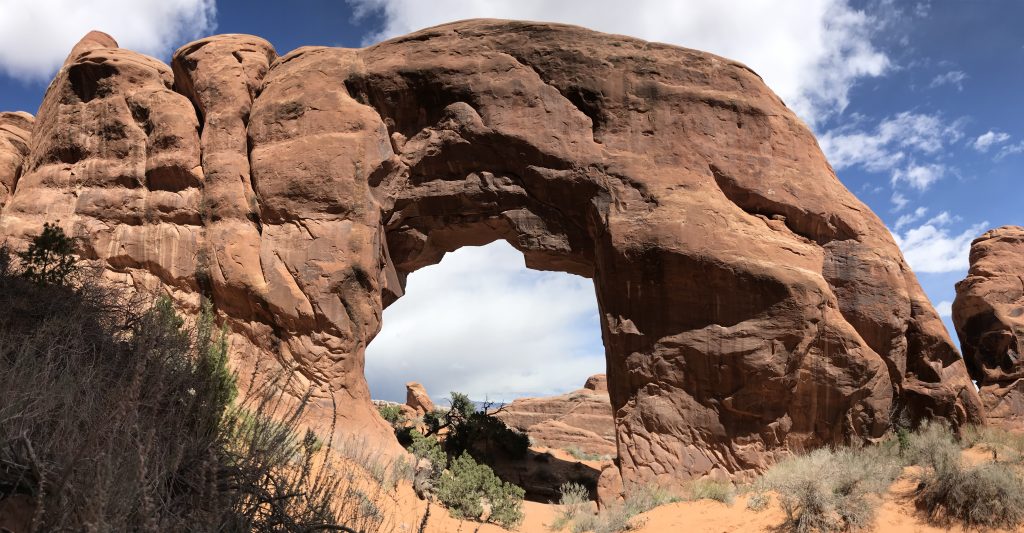 From a parking lot, you can do a small hike to the Sand Dune Arch and then further to the Broken Arch. 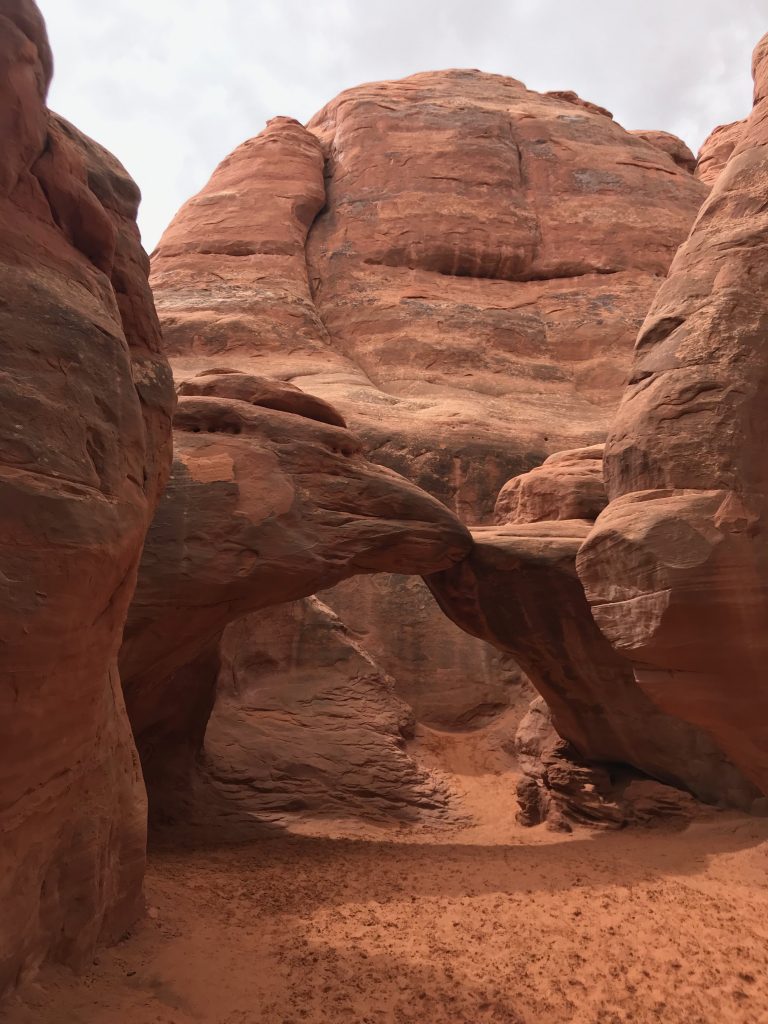 The trail to Broken Arch crosses a large meadow and even goes through the arch. We could see nice rock formations from the distance with some rain clouds coming up. 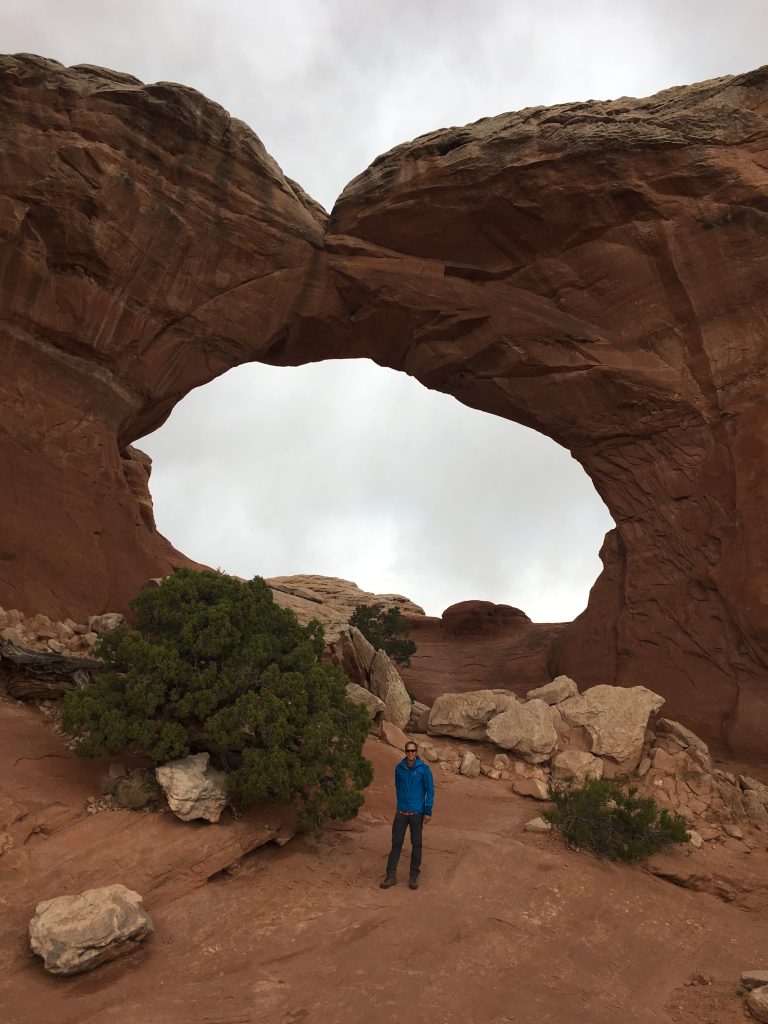 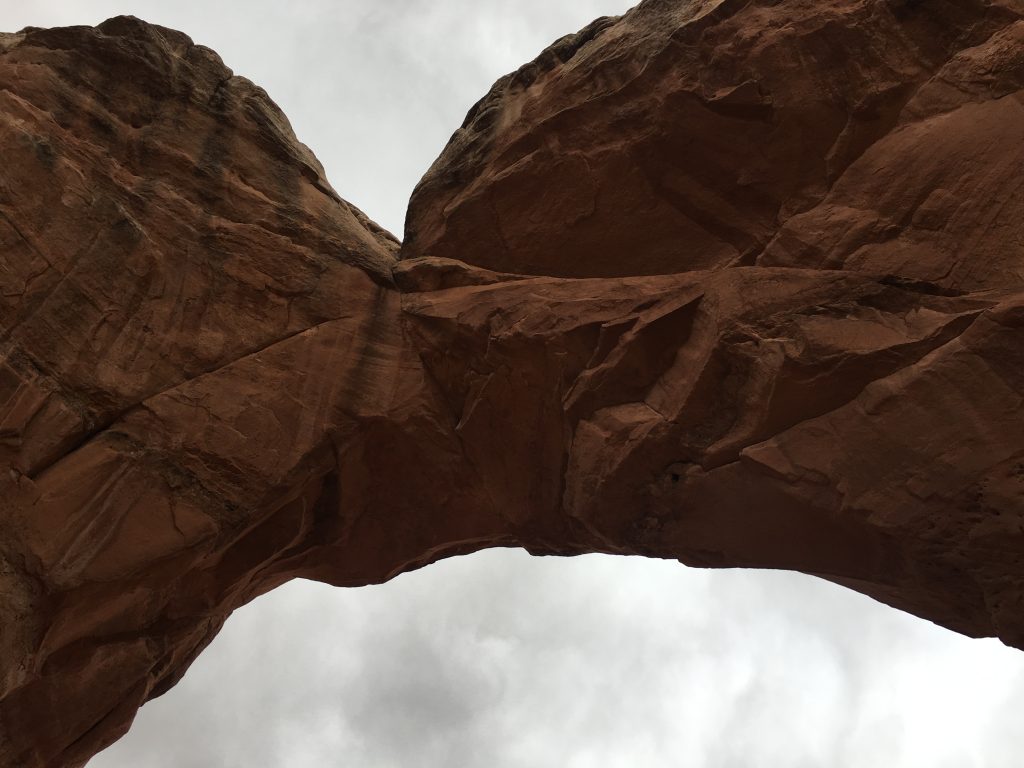 Broken Arch from below

The final stop was the Double Arch, where three major openings are enlarging side by side and they all began as one pothole arch. 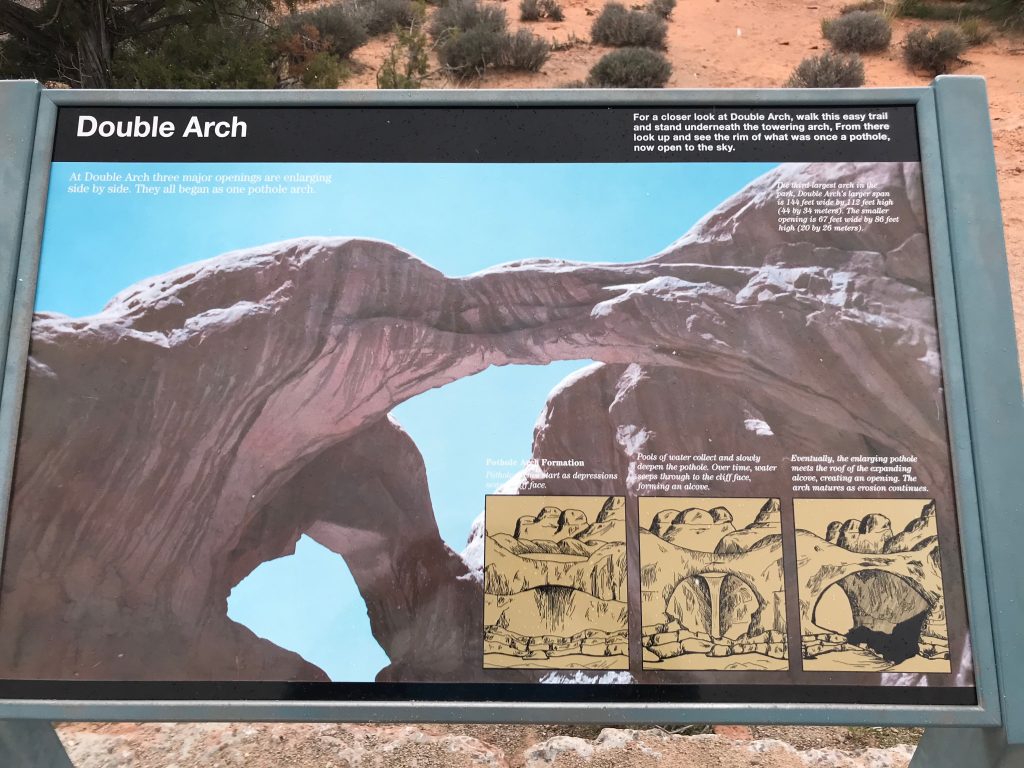 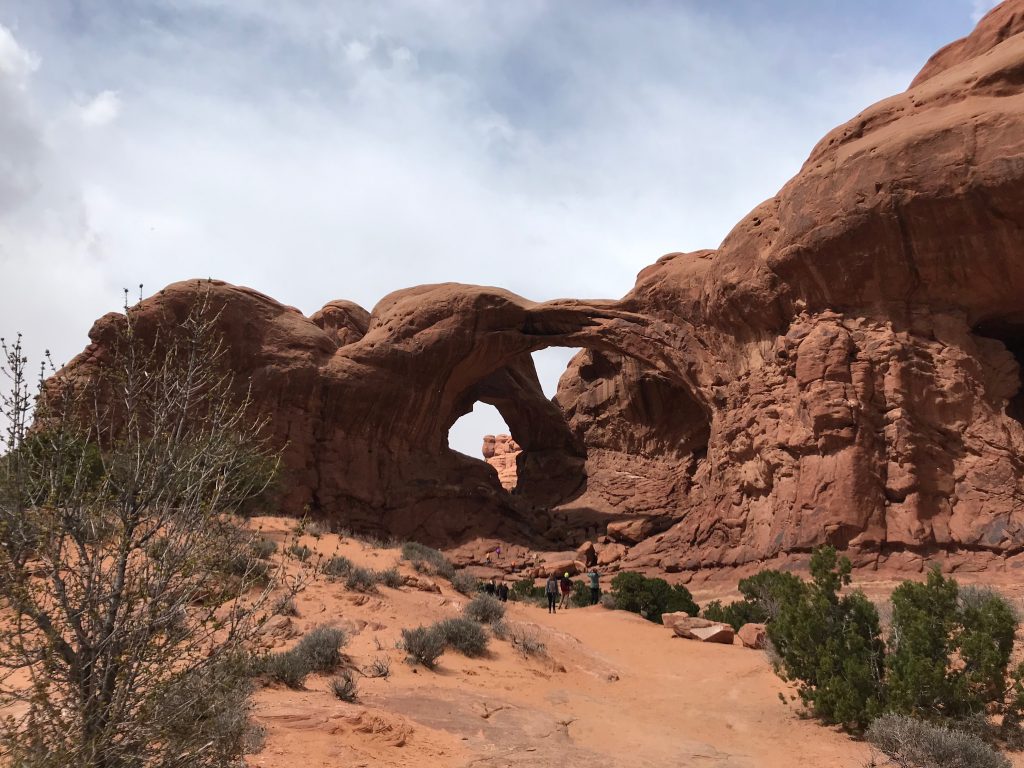 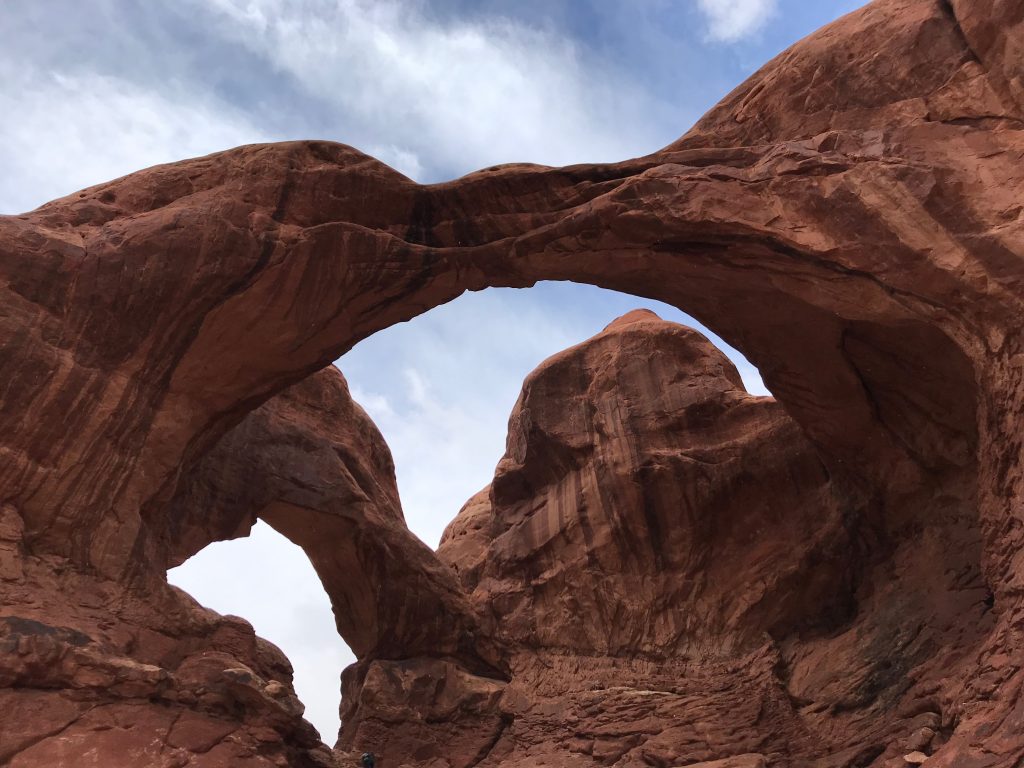 One last words about reservations: As you might have noticed by now, we are a bit annoyed by all campgrounds being fully booked way in advance despite this still being the beginning of the low season. In the brochure of the Arches National Park we read, that because visitation here has topped 1 million people, they have proposed a Traffic Congestion Management Plan which proposed a vehicle entry reservation system starting in spring 2019. I have no idea how that will work, but the very name “entry reservation system” suggests that you probably can’t just show up like we did. Other national parks like Zion for example established a bus shuttle system that deals with the traffic and where you can still show up spontaneously. So I guess in the future, you have to plan in advance not only where to stay close to Arches NP but also when to enter the park with your car.

Drive to The Needles

It already started to snow on our way back from Broken Arch and continued to rain and snow on our way to Birkus Camp, a free campground close to The Needles district in Canyonlands NP. 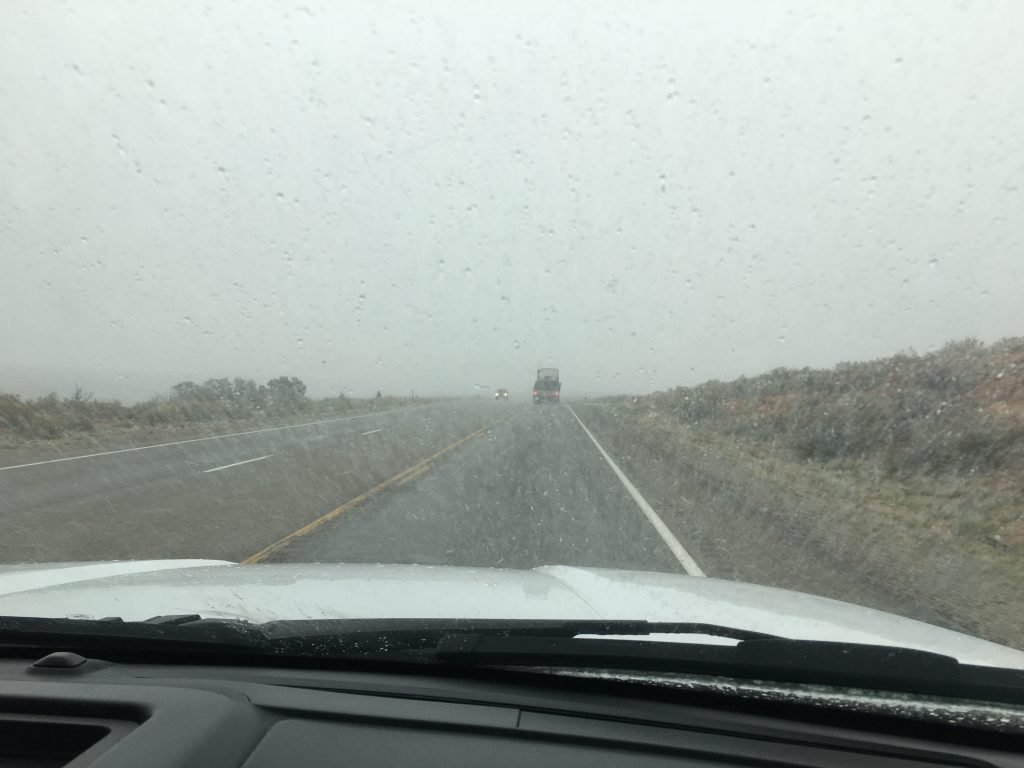 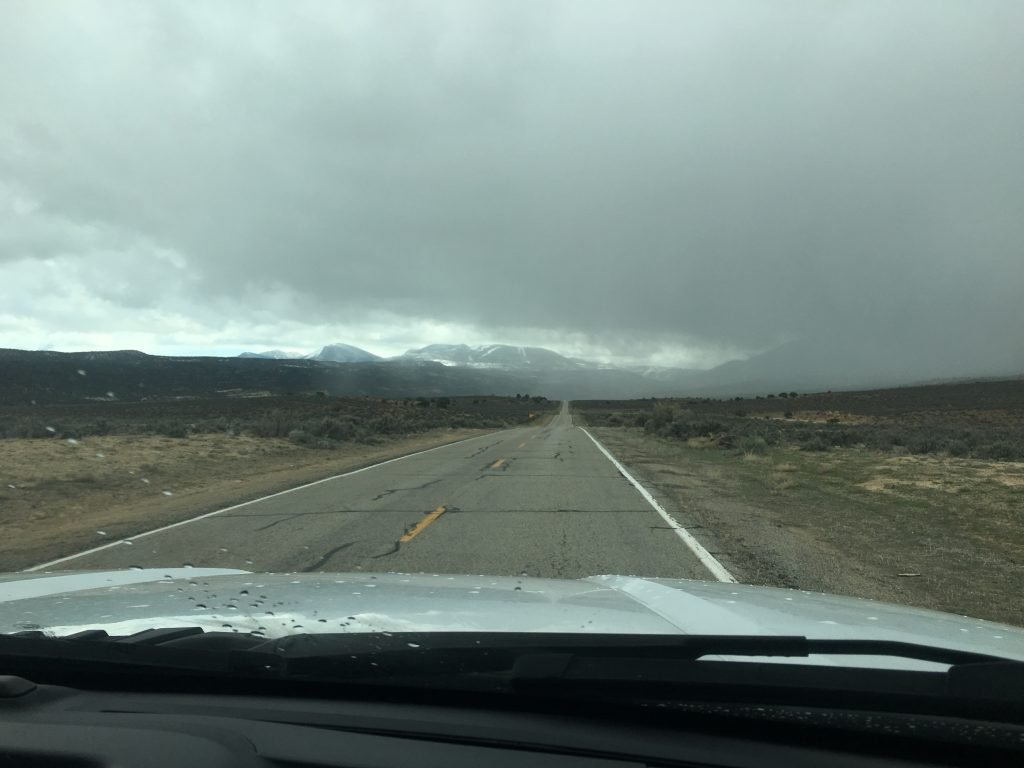 But after a while, the weather got better and rewarded us with nice views again. 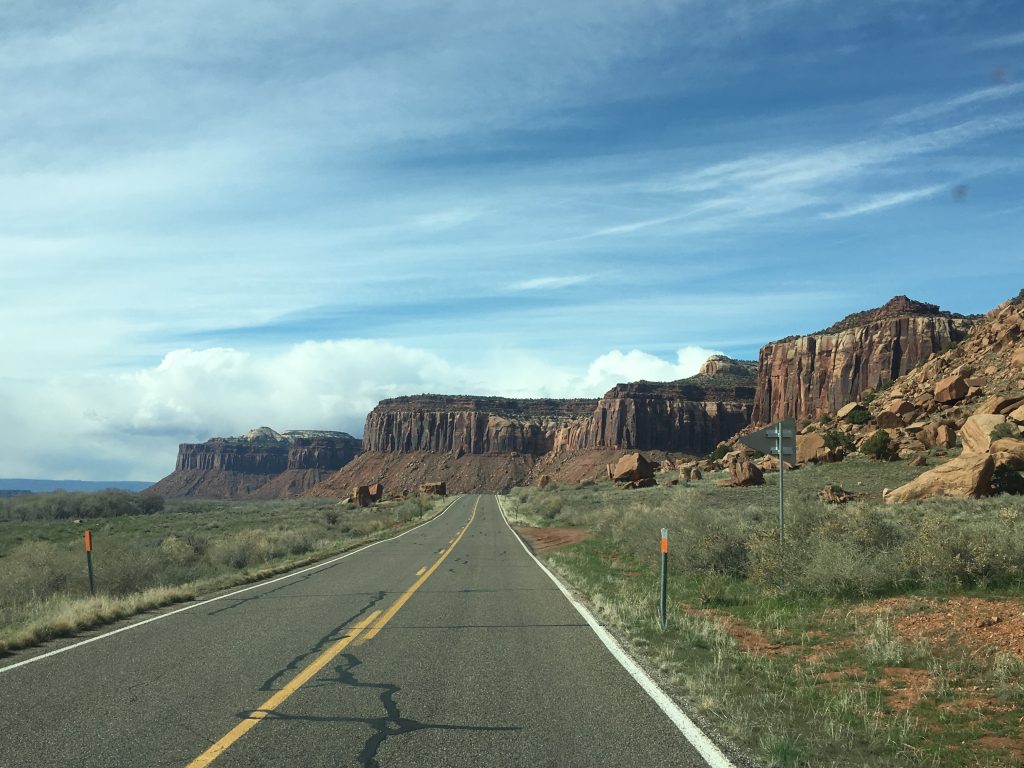 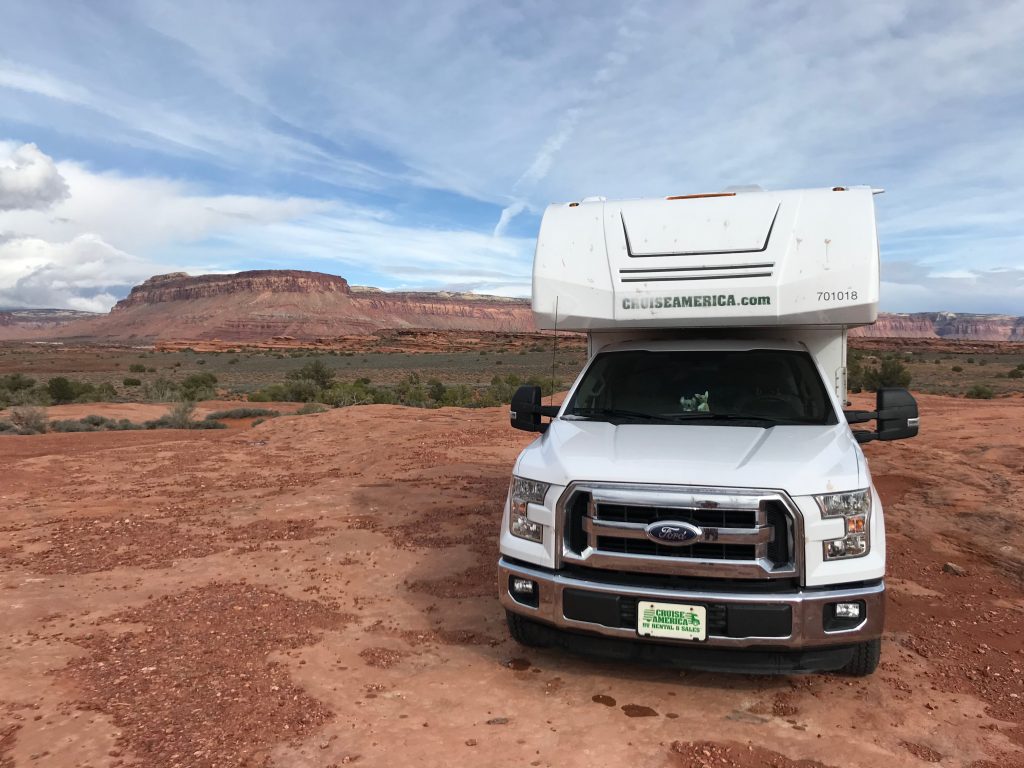 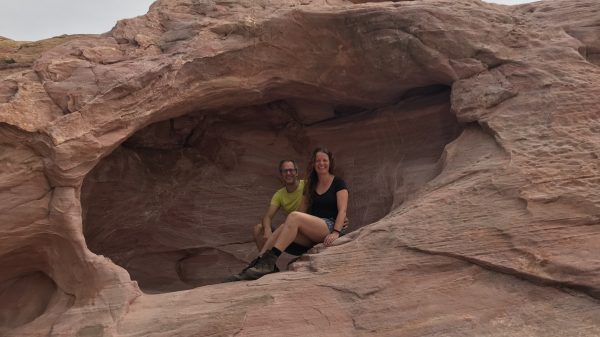 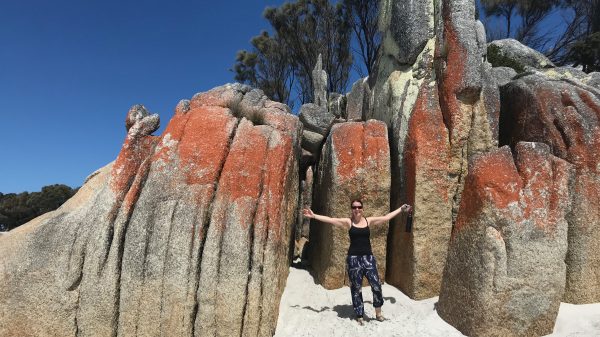 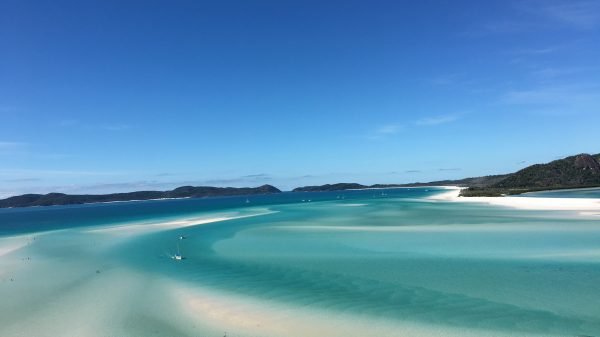